With the next release of Conducttr, authors will be able to create pervasive open world stories. By this I mean that a regular linear story can now be re-told interactively by questioning and examining characters, places and events such that the reader/player uncovers story pieces using their own reasoning and interest to explore aspects that interest them most.

Does this mean that the classic three act structure is lost? No. Does it mean that there’s lots of branching content that’s created but never seen? No.

Although an open world is a type of non-linear storytelling that implies to some a lack of climactic structure and pacing, the author decides how much of that open world can be seen by the player and when it’s seen. Hence, by regulating the degree of openness, the author has some influence on the player and how the story unfolds.  For example, with our authoring & management tool, Conducttr, Characters only reveal information when triggered by the right event:  this could be a date & time or it could be a special “matchword” within an email, text message or Tweet. Further, a special sidekick or mentor character as well as providing help and assistance can also provide some pacing and dramatic structure by prompting and hinting to the player at appropriate times.

Note that what I’m describing is not Interactive Fiction (IF) in the way it’s typically seen today. IF stories are typically structured around locations – the player finds herself in a place, the place is described and there’s a set of commands that allow the player to change location or interact with characters and objects in that location.

In the open world story I’m describing, the story is structured around characters. This means that for the characters known to the player (note that some may only be revealed later in the story), all of them can be interrogated at any time and they live out their fictional lives in the real world – they have mobile numbers, email addresses, Facebook pages, Twitter accounts and so on.

This post explains how I’ve been transitioning from linear story writing to open world writing. Note that I researched the games world to find methodologies and tools to write open worlds but found no standard approach or software to use. This article is a good primer on non-linear storytelling and some may wish to browse this first before continuing.

From Linear to Open

The diagram below shows how to take a linear story and create it as an open world in Conducttr. While it’s probably possible to go from Step A to B to C and then start on the open world, I found myself often working in parallel – developing the linear story (which effectively sets out the timeline and chain of events) while switching to the character bios (D) and publishable content (E) as the inspiration took me.

Note that this writing – steps A,B,C,D, E – is 80-90% narrative work with very little “experience design”. That said though, at the initial concept step (A) I did scope out the platforms I wanted to use (F) and how the initial characters would map to those characters. That is, Lauren Ortega is a private eye and she communicates with email, Ben Sutton is a security guard working near the murder scene and was on shift at the time of the crime – he communicates with SMS and only during the night (6pm to 6am) as he has to sleep during the day. 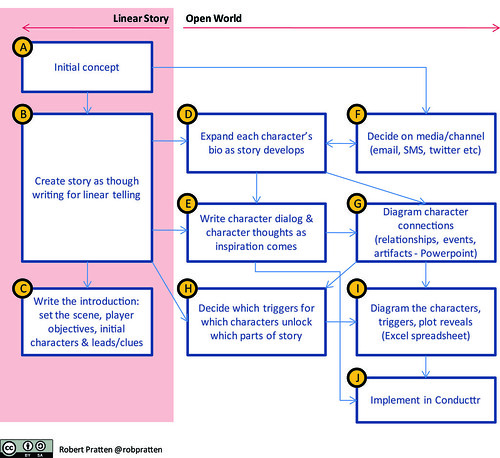 Now having characters and a plot, I sketched a diagram that showed the connections between the characters and the primary plot-pivoting events & artifacts. This is shown below: the initial information given about the world is shown in pink and the arrows show how the story flows, from right to left, from the first points of contact towards the key concluding content from which the player can deduce the murderer. So, for example, from the Victim the player can discover the victim’s girlfriend (Jenny) and from her discover a new character, Keisha. Keisha will reveal information about a necklace which will be used by our private eye (the mentor character providing access to police records and forensic information) to reveal a new character, Morton the fence who will reveal important information about the murderer’s whereabouts and hence place a character at the scene of the crime at the time of the victim’s death. Phew!

The diagram doesn’t reveal how the characters will reveal this information – it’s intended to be a quick overview to highlight the through-lines in the story logic. 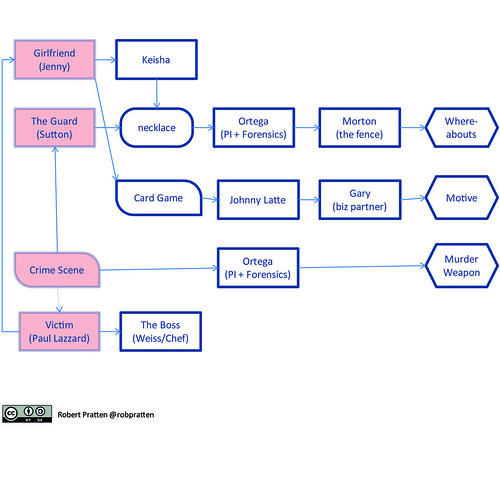 The final steps then (H + I) are to determine how the world will open up from those initial characters and location.

In Conducttr, an event or “trigger” is required to provoke a character into revealing new information. For example, an incoming email containing the words “tell me about the girlfriend” might prompt a reply “You can contact Keisha on keisha [at] yahoo [dot] com – ask her about THAT NIGHT”. Now the player has been introduced to a new character, a new email address and a hint at which matchwords might unlock useful information. Of course, the character didn’t reply directly with an email, it might publish a YouTube video with new information about the crime scene or a psychological profile of the killer.

Also soon to be available in Conducttr is delayed responses. Not only does this allow more realistic character response times but it can be used to add interesting surprises & twists like that shown below: on the first enquiry the player draws a blank – the character can’t help with the questions – but then, after some reflection and a 40 min delay, the character reverses their reply and provides new information just when the player thought all was lost!

Having looked at flowcharting, mind mapping and various other methods of documenting relationships, I came back to my usual approach for documenting ARGs and evolved it to deal with open world interactions. A simple example is shown in the example below.

The page is divided into three sections: characters, triggers and story. Each item (character, trigger and story element) has a “buzz bar” extending left to right along a notional (e.g. fuzzy) timeline. The arrows show the interaction between the three elements. Hence, in this example, the trigger word “Lizard” when mentioned to the character Jenna will reveal a new trigger word “Cards”. Of course the character doesn’t just return a one-word answer – she responds with a story segment that introduces the word Cards in context and in character. Her reply should hint at how the word might be used in the world.

The diagram shows that both trigger words  – Lizard and Cards – can be used with both characters – Jenna and Latte. But note that the character Latte is only revealed after Cards is mentioned back to Jenna. Mentioning Cards to Latte meanwhile will reveal a key story element that Lizard (the murder victim) used his bosses’ kitchen while the boss was at a weekly card game. 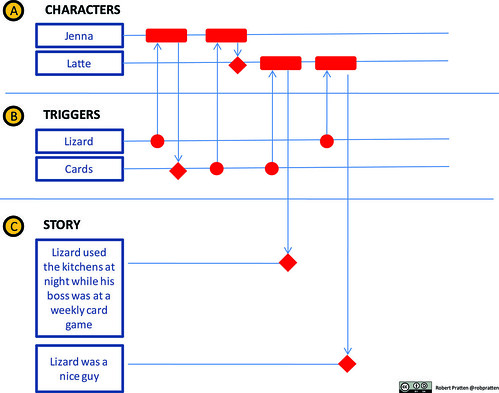 The diagram above was drawn in Powerpoint but I actually found myself working in Excel because it proved the quickest way to reorganize and re-draft relationships. A screenshot is shown below but you can download the spreadsheet here (it’s a work in progress).

The final step (J) shown in the first diagram of this post is the implementation in Conducttr. However, I have to confess that my workflow has never quite been so structured or linear and I find myself hacking steps E & H directly into Conducttr – working across documents – Word, Powerpoint, Excel & Conducttr- as I test and experiment sections of the world and iterate back through another draft of the linear story.

For whatever it’s worth I found that I created this final diagram during the scripting stage but it never quite proved to be the help I hoped it would be. I leave it for you to decide if it might be helpful to you. The idea was that the story starts with a murder and finishes with the killer. The arrows point to attributes of the murder and the killer and to identify the killer the attributes eventually have to match.

Any thoughts, suggestions and recommendations for documenting open world stories would be greatly appreciated! 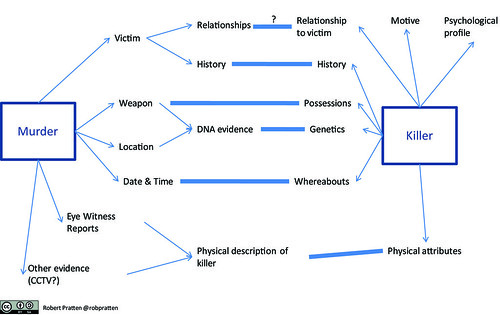 Gaming for Peace: Our talk with Mads Haahr

This post explains how to transition from writing linear stories to writing open...